My vacations usually involve hiking, skiing, climbing and sleeping outside. Instead of a Fodor’s guide, I look at a topo map.  Compass bearings direct me more so than street signs.  When I plan said trips, I don’t budget money. I budget how much food I need to pack and how much gear I have to carry.

The only exception to these types of trips are family visits. And, as much as I love my family, these are not vacations. 🙂  Even when my someone and I went to Germany to see her family, it was a family trip more so than a vacation as well.  People to see, catch up with and usually an event (such as a wedding) that the visit is centered around.

Sleeping in a comfy bed, going out to eat, relaxing and no obligations other than what someone and I decide is not something we have done in our five years together.

For our tour two-year wedding anniversary, we decided to take an honest-to-goodness vacation.  Courtesy of a timely deal via Social Living, we stayed three-days in a B&B in Taos, NM.

We’d play tourist. Scope out the sites. Eat at the restaurants. Walk around and take in the ambiance. A bit different from our usual mode of “do something outdoors first, do something cultural on the way back“.  And we’d come to the conclusion that while there is something to be said for a mainly cultural trip, camping out is perhaps more our style. 🙂

Why Taos? Over the years, I have grown to enjoy the unique culture that is  northern New Mexico and nearby southern Colorado. The history, the food, the unique blend  of different cultures and the scenic beauty.  And my someone and I have wanted to see the Taos Pueblo for a while and see the descendants of the Ancestral Pueblo culture that interest both of us. We have visited Taos before but never overnight. It was merely passing through or just after a trip. We wanted to see it more.

With all these thoughts in mind, we made a long weekend of Taos.

We made our way down along the Front Range of Colorado. The city of Pueblo was passed and we crossed into the part of the state that has strong Hispanic roots.  The Spanish Peaks were seen and our exit soon came up.

We drove to the small town of San Luis and started our cultural trip in earnest.  I’ve been wanting to see the bronze sculptures that make up the Stations of the Cross.

These bronze sculptures, along a rocky and winding .75 mile walk, are amazing art. The stark area, with the mountains in the background, only add to the feeling of majesty.

If this display was in Taos or Santa Fe, it would be a major tourist attraction for its artistry and location. Instead it is located in a sleepy little town that most people just get gas at and continue on their way.

The sculptures, and three days of being in this heavily Catholic influenced area, reminded me of a quote by Martin Scorsese. In response to the influence of Catholicism on his films, he replied “I’m a lapsed Catholic. But I am Roman Catholic — there’s no way out of it”.

There is my (half) joke about the residual Catholic guilt in my life and how it affects my world view. But my Catholic upbringing also has lent itself to perhaps having a yearning for the sacred and the mysterious.  Catholicism, more so than the Protestant faiths in my opinion, is about the searching and immersing yourself in the “Great Mystery”. Rather than seeking this mystery in a god, I seek it in nature.

Perhaps it is an overly romanticized view of the outdoors…but it is an influence.

With these thoughts, or perhaps feelings, in mind, we went into the Moorish style church.

A simple but beautiful structure that shows the influences of the area.

After this amazing little gem, we quickly crossed into New Mexico. Taos was soon reached.  We checked into our B&B that was a historic landmark in its own right.

After checking in, we made our way to the San Franciso de Assisi church.  One of the most iconic churches in the southwest, if the not the United States, it was much quieter than when someone and I first saw it back on an Easter Sunday a few years ago!

After our walking tour, we had dinner at the excellent, and very local, Ranchos Plaza Grill.  Only mere feet away from the plaza, it was an excellent location to look at where we just explored. The chile relleno was amazing. And the sopapillas were equally good. Fresh, hot and quite tasty with honey.

The following morning we rose early and went to the Taos Pueblo. Having seen the ancestral home of these people, we wanted to see their current home.

The Taos pueblo has been around for almost one-thousand years and it was interesting to see a culture that has been rooted in the land for so long.

The creek that has been providing water for the Taos for ~1000 years. Blue Lake, the source of the creek, is considered sacred and off-limits to all but the Taos people.

Original Spanish church whose foundation dates back to the 1619. The church was destroyed by the US military in 1847.

When I visited the village where my own ancestors came from, there was a feeling of connection. Walking the same streets, seeing the same mountains, drinking from the same springs.  That was only a small taste of what the Taos Pueblo have with their culture. I can only imagine what it must be like to live, worship, eat and celebrate in the same place as many generations of my people have done before me.

After the Taos Pueblo visit, we explored the next era of southwest history: The Spanish colonial era.

The someone and I went to the Hacienda de los Martinez and saw this interesting building. 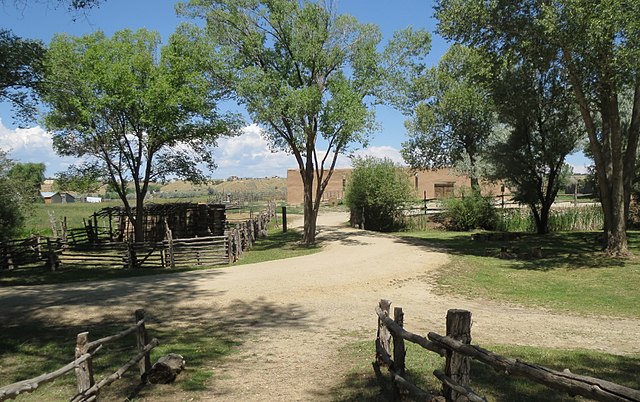 And what would Taos be without exploring its famous art scene?

We went to the home of  Nicolai Fechin. Besides being an amazing painter, he designed his own house, did his own folk-influenced wood carvings and even built his own furniture.  An interesting mix of Russian folk art and what we think of as southwest culture.

At this point, Mrs Mag and I were “museumed” out.

Time to relax. And what better way than a brew pub that is slightly off-the beaten path, serves green chile beer (‘natch) and makes a good pub-grub burrito?

The sunset was not bad, either.

The following morning we headed out and went to start the camping part of out trip.

We drove by the tourist trap of the Rio Grande Gorge Bridge.

Impressive as the gorge was, I think we enjoyed our view of it upstream that we experienced few years ago better.

We also passed by the famous Earth Ships a few miles from the bridge.

The full tour of the Earthships is seven dollars.  We did not take the tour and decided to snap this one photo instead.  The term “Earthship” itself is a trademarked name. Even hippies don’t mind capitalism at times it seems. 😉

We continued our drive and was soon back into Colorado.

Time to camp out at the Sand Dunes. A place where we enjoyed a few years ago as well.

Much to my chagrin, the place was unexpectedly busy considering it was post-Labor Day. A lot less intimate than the cold Thanksgiving  when we were there in 2010.

The place is still striking.  We had the dunes to ourselves in the early evening..

And in the early morning the following day.

We also did a short hike to the nearby Zapata Falls.

From the trailhead, we enjoyed one last view of the dunes.

We made our way back to Boulder.

A great anniversary. And a bit different from our typical trips.

We loved the cultural aspects of the trip. And to be in walking distance of many places in Taos was quite nice.

But the quiet time in the outdoors is needed for us.

Thanksgiving is my next long weekend off. A trip is already planned.

We may visit a museum on the way back. And I would not turn down some delicious Mexican food again.  But the glow of the moon and the stars above will be our night life. The red rocks of canyon country will be our art. And we’ll again walk where others have walked before.

We look at gear as a tool. And like all gear and c

Thanks to a coupon and a gift card with @backofbey

A swell time over Thanksgiving ... @ramblinghemloc

@ramblinghemlock uses her gear and clothing for a

Into the canyon ... Another backpacking trip into