Why I stopped counting ounces with my gear…at least precisely.

When I started backpacking, the concept of lightweight was alien to me. The idea of weighing gear, in general, was unknown.

I simply took the gear I thought I needed, went backpacking and enjoyed the experience.

I bought a “real” pack: An EMS 5500. Loaded up the Whisperlite stove, a PUR water filter, slept in a Campmor 20F bag with Holofill, cooked in stainless steel pots and borrowed my buddy Tim’s Eureka free-standing tent with fiberglass poles (later I bought a  “lightweight” one-person Walrus Swift at a little over three pounds).

Looking back, the gear was heavy, bulky and inefficient. But  I was able to get out regularly and enjoy my first two seasons of backpacking. I explored the White Mountains, experienced my first sunsets seen over mountain ridges and was hooked for life on something that is more than a hobby; it is a passion.

When I hiked Vermont’s Long Trail for the first time, I purchased a high-end Feathered Friend’s down bag that I still have.  The bag was not only lighter than the Campmor synthetic fill bag but much less bulky, too.  Other than that sleeping bag purchase, weight and bulk were not a consideration.

Then I hiked the Appalachian Trail a year later.   After over two-thousand miles of schlepping a pack up and down the mountains, I realized just how heavy my pack was for what I was doing.

The nascent Internet forums started discussing weird material such as “silnylon”, making stoves out of Pepsi cans and how people should eschew their boots for trail runners. I was intrigued.  I did the Long Trail again that year. My pack was smaller and lighter; I cooked with a soda can stove and a thrift-store pot.

Over the years my gear was refined, tweaked, swapped out and changed.

My base pack weight became lower.  I was comfortable with three-season backpacking using a sub-10lb kit.

Then something happened: I stopped caring.

I don’t mean I stopped caring about staying light.

Rather I ceased to care about getting the absolute lightest gear or what the exact weight was anymore.

I recently was asked what the weight of my winter gear may be. It occurred to me; I did not know the exact weight at all.  How much do my skis and bindings weigh? What does a wax kit weigh?  How much does my avy shovel weigh? I had no freakin’ clue.  It is just stuff I need and use.

Even my most recently updated gear list (from 2012!) used (gasp!) weights listed on websites rather than weighing the gear myself.

So why this lack of interest in knowing the exact weight of my gear? 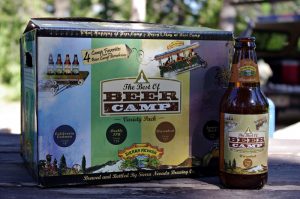 I will not give up beer, however!

Just to emphasize again, I am not saying I have given up on caring about what I carry. Far from it.

When I needed a larger pack for the activities above, the ULA Catalyst was purchased because of its capacity and being lightweight for what it does. When I had to finally retire a sleeping bag, I went with a quilt because it is lighter and does what I need it do for three-season backpacking.

I just don’t obsess over the absolute lightest gear  I use a pack that is slightly heavier than the lightest models of packs offered.  I go off-trail and scramble enough that the lightest pack would not have fit my needs. And I really don’t want two packs (one for off-trail travel, one for on-trail).  In a similar vein, the weight of one type sunglasses vs another is something I have never done. Nor I ever will.

Having said all that, it is still good to know the weight of gear in some cases:

But these are just benchmarks…and not the goal itself.

However, I find after a certain point you just know what works and what doesn’t.

The takeaway from all of is that my pack weight for three-seasons may be ultra-light…it just ain’t ultra-precise anymore. 🙂   And that line of thought applies to pretty much all my gear.

And I’m OK with that.

Well said, and I agree! Thanks for the article… 🙂

I feel ya. It feels good to know at this stage in my hiking I don’t always have to be on the UL merry-go-round going round and round chasing a destination that I never seemed to fully arrive at or be at for long. That UL Nirvana carrot had me pulling someone else’s cart for a long time. I’m not ready to abandon the digital scale yet though. I wonder if there’s an UL Anonymous meeting being held tonite in my area?

I appreciate the caution that weight does matter when you are first beginning the transition to light weight hiking. Pack weight is also a function of the hiking style. I hike in, set up a base camp and then do day hikes from there. So I do like a few luxuries.

If you were a sub-mariner your pack weight would be best described as having reached the point of neutral buoyancy. It’s neither too light to compromise safety or comfort, nor too heavy to impede your enjoyment. Which is, as they say, the whole point of UL.

well said! sometimes propaganda gets the better of inexperienced backpackers and they spend money foolishly. pack weight is important, but it’s relative to your abilities , the season , your budget, and durability. I’m a pack stuffer. I know what I need and have good gear, so when the time comes I usually grab and go. although I usually have a ready to go pack in my hatch

Gear is not that heavy, unless you go overboard with camp chairs and double-walled tents and dutch ovens. The heaviest stuff in your pack is food and it does pay to weigh that so you know how many days worth you have and so you don’t carry too much needlessly. Plus sometimes you need to carry a lot of extra water. Most of the gear I now carry is stuff that I’ve had for years but is so good at what it does functionally, that I consider it irreplaceable by lighterweight fabrics. Like you, weight is far less relevant to… Read more »

We’re in the post-ultralight era of backpacking and it feels so good.

Not sure what era we are in, but kinda in the “good enough for me” phase at this point for my backpacking. 🙂