The [National Park] service announced a pilot program to expand cell coverage in five national parks, hoping to explore how the NPS can enhance the visitor experiences of “new audiences who rely on smartphones and tablets to connect them to the things that are important to them.”  — from a recent article in Slate Magazine about proposed new fiber optic connections in Yellowstone and Grand Teton National Park

Over the years, I’ve noticed there is more of an emphasis on connectivity… wherever a person may be.

To be “out-of-pocket” is increasingly less acceptable in today’s world:

And people just want to be connected, frankly.

The important things people want to be connected to are not the natural beauty around them but their connections to their normal lives.  As noted in the article linked above, there is increasing demand for connectivity. And, no surprise, there is money to be made on this connectivity. The National Park Hospitality Association is the most significant advocate of putting high-speed fiber in the national parks.

Even Parks Canada is contemplating this type of setup for their facilities.  Because, “some people were also required to stay in constant contact with their workplaces, even while whale-watching or on a break from hiking.”

It is something I wrote about a few years ago and more recently.  However,  it is one thing to want connectivity, but now it seems to be mandated. And to not  be connected is somehow irresponsible. EMS, police, and other key industries…very understandable (and they get well deserved and real vacations at least). But seems a lot more people, to quote the Parks Canada official again, are “required to stay in constant contact with their workplaces”.    Of course, the tacit implication is that free time is well, not really free. Because if you can be reached, well, then, you SHOULD be reached! 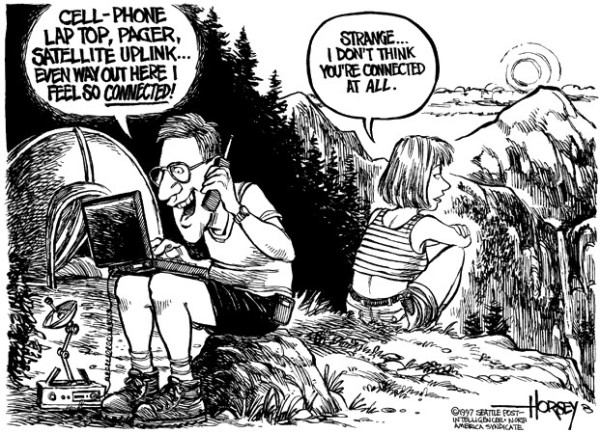 And all this long rambling is to set the foundation for discussing a book written almost twenty-five years ago. Yet, a book that somehow seems more timely today: Wilderness Ethics: Preserving the Spirit of Wildness.   Written by the well-known New England wilderness advocates  Laura and Guy Waterman,  the book is not merely a bullet point of lists of such topics as camp 200 feet from water, put out your fires, pick up your trash and so on.

Rather, the book tackles the subjects that people are sometimes hesitant to talk about and that I sometimes struggle with myself.  Issues such as publicizing specific areas to save them vs loving them to death, what mode of travel is compatible with keeping places wild, bringing people into the wilderness vs limiting numbers, making a Wilderness Area safer (more signs, more trails, more amenities) at the expense of the wildness of the area, etc.

The subtitle of the book is the real point of the text: Preserving the spirit of Wildness.

It is not enough to merely have a wide open area away from roads. But is the area truly wild? Does it really have what we seek in the backcountry?

The book was written just as cell phones were becoming common and affordable for many people. Yet, what the Waterman’s wrote concerning cell phones could easily apply to our much more powerful, versatile and certainly more connected smart devices:

“When a new technology is applied to the backcountry, we tend to focus on its practical uses. When someone later points out a gadget’s impact on the quality of the wilderness experience, we tend to classify such ramifications “secondary”  or “side effects” of the technology’s application. By taking this view, we preclude questioning the original, intended use of this technology. But in fact the changes that a new technology makes on the wilderness experience are not all secondary, but are intrinsic to the very nature of that technology. The medium is the message. The tool becomes the experience.”

But the book is not a fire and brimstone lecture from a pulpit.  Rather, the writing style is very witty, a bit playful, engaging and is more in the tone of a your favorite college professor asking questions that make you think. And at a little over two-hundred pages,  it is a quick read as well.

The titles and sections of the book perhaps give the best flavor of the writing style. Some examples:

It is the last section that is the takeaway from the book for me.

What do we want from our wilderness areas? Do we want wildness or not?  And should other people make and force the choice for us?

The Waterman’s wrote an excellent book for anyone who cares about the outdoors as something more than a bucket list of things to check off or a way to get new toys. It is a book for those seeking the wild in our wilderness. Something to truly be immersed in rather than just visiting.  Where an app on an Android device won’t necessarily be able to tell you where the bison can be seen, but if you are lucky, you just may see one while sipping coffee one chilly morning in camp.

The Watermans predicted more of the former and less of the latter.

Almost twenty-five years later, it looks like they may have been right.

Let us hope some wildness will still remain to be experienced in the years ahead.

UPDATE DECEMBER 2015:  Sigh. The Waterman’s are more correct every year, the NPS plans to have WiFi/high speed connectivity in all their parks by 2018.   As the CIO stated in the linked interview: “I can tell you the complaints we get when somebody goes in to a park and finds a hotel doesn’t have high-speed WiFi so they can do their work while they are on vacation.”   The line between personal and free time and vacation and work is getting more and more blurred every year. We continue to trade personal time for a paycheck….

Most influential gear? ... I received a recent ema

A trip to the Pacific.

Unexpected layover for a few hours in Phoenix on t