As I mentioned, I altered my outdoor plans due to the recent snowstorms.

I had a somewhat traditional birthday. A relaxing and enjoyable day spent with a friend.

But it was time to give myself my favorite gift: The gift of time.

Time to spend backpacking, exploring some local history and culture, and perhaps to enjoy a good meal.

And where to enjoy this gift of time? One my favorite places: New Mexico.

New Mexico is an intoxicating mix of history, blend of different cultures, delicious food, and striking natural beauty. It is a place where I always enjoy returning.

On this trip, I would again explore the Pecos Wilderness in addition to the history around Taos, Santa Fe, and points north back to Colorado.

I left my home early Saturday and made my down to the New Mexico and Colorado border. The snow covered Colorado Sangres was a rugged wall of snow and mountains.

A short while later I was in Taos and enjoyed the first of some delicious New Mexico style dishes.

Looking up to the mountains, I decided to reverse my plans.  The cultural and historical portion of the trip would be done first. Then, I’d backpack from the south facing trailheads outside of Santa Fe where the snow levels would be a bit more lower.  More consolidated versus the north-facing approach as well.

A simple campout was enjoyed for the first night in the national forest lands at the start (end?) of the High Road to Taos.

Early in the morning, I went to the Picuris Pueblo. Nestled in the mountains, it is a community that has survived for almost a thousand years.  Unlike the more well-known Taos Pueblo, the Picuris Pueblo receives fewer visitors.  I did not see anyone around to purchase a possibly needed photo permit. Out of respect, I just briefly looked over the area. More exploration will be needed for another time. 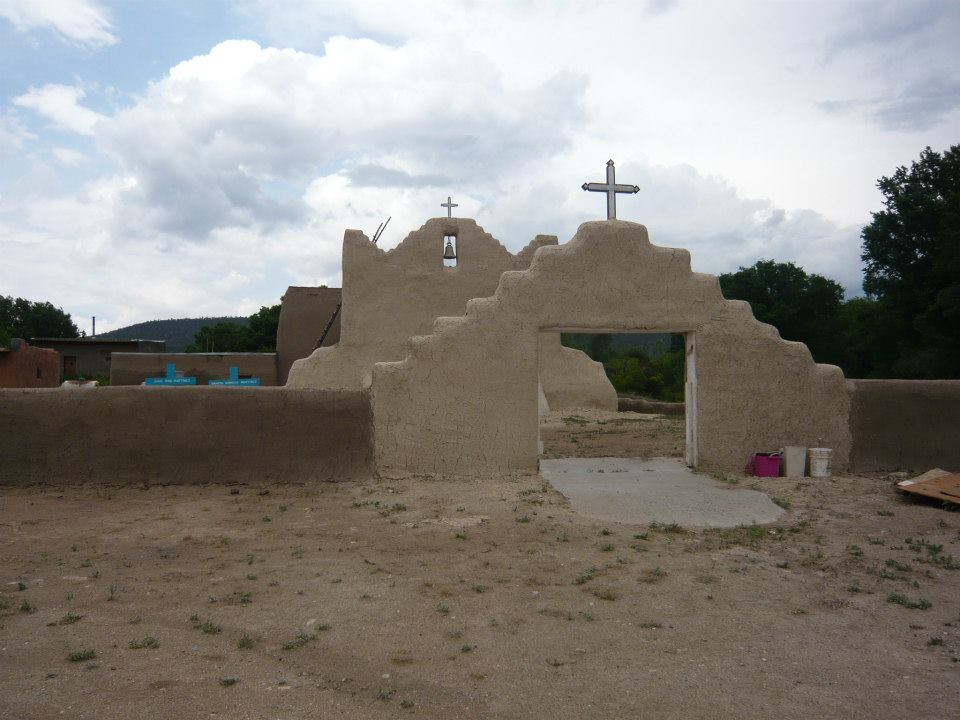 Along the road, I went and saw all the small villages and towns along the way.

The pilgrimage site at Chimayo was reached.  Sunday Mass was being broadcast from the speakers.

Even with tourists such as myself, the place still had a feeling of deep spirituality and devotion.  I do not consider myself Catholic at this point in my life. And have not for quite some time.  But the Catholic roots can’t be denied. And have affected my world view.   I was in a remote village in rural New Mexico. The familiar smell of candle wax and incense wafting in the air along with hymns from my childhood being heard all served to put me in a thoughtful mood.

The High Road was continued to be traveled upon.  The mountains gave way to the high desert terrain. Many crosses dotted the hillsides outside of Chimayo.

Santa Fe was reached.  Busy as expected on a Sunday.  But I did enjoy some delicious foods in the old square. And enjoyed the views towards the distinctive buildings.

The old Pecos Pueblo was visited.  The Pecos Pueblo was once a powerful commercial entity.  The strategic position between the mountains and the Plains with ample water nearby made this Pueblo an economic powerhouse.  Alas, the usual history ended this era. Only 27 inhabitants were left towards the end.

Continuing on, I visited the nearby Glorieta Pass battlefield.

A pivotal battle of the Ameican Civil War, this incident is not well known.

Today, the battle area is quite and peaceful.  The site that had the crux of the battle is currently not accessible to the general public.

My trailhead for the Pecos Wilderness was quite literally up the road from the national historic park.

I walked in about four hours, made camp, and made way up above treeline the following day.

A mountain cathedral was entered.

From a high point, the wilderness was below me.  I could see the snow-covered areas. And a storm moving in from the Colorado Sangres.  The wind was whipping.

The loop turned into an out-and-back.

Camp was made not far from a sub-alpine lake.  It snowed overnight.

The lower I went, the nicer the weather became.  Fierce winds gave way to a gentle breeze.  Gray and cloudy skies became sunshine and warmth.

The vehicle was reached. I drove north and headed home.

But I made sure to enjoy one last New Mexico style meal. 🙂

I again headed north and made one last historic pitstop at the site of Ft. Union.  Much as with Ft. Laramie further to the north, Ft. Union was an American outpost in an isolated area.

A major focus for the Glorietta Pass Battle, trade on the Santa Fe Trail, and the only sizeable outpost for hundreds of miles around.   As with Ft. Laramie, the railroad and the end of the Indian Wars made the need for a fort in this area unnecessary.

The area is still quiet and has not changed much since historical times.

I made my way back to my home in the Front Range.

Another enchanting trip completed to one of my favorite areas of the world: New Mexico.

Hey this is a great post on several levels. Looks like you had a great trip, Happy birthday btw. This was a real reminder for me of what brought me to where I am politically and socially… my own Catholic upbringing. Like you I don’t identify as such now, but I’m certainly thankful of its positive influences on my life now.

Thanks! I always come back to what Martin Scorsese said about his own Catholicism “I’m a lapsed Catholic. But I am Roman Catholic – there’s no way out of it.” And, I am currently reading “Born to Run” by Bruce Springsteen. He has an interesting take on Catholicism as well: “In Catholicism, there existed the poetry, danger and darkness that reflected my imagination and my inner self. I found a language of great and harsh beauty, of fantastic stories, of unimaginable punishment and infinite reward.

Nice! What an incredible variety of photos.

Drizzly day makes the decision to hike locally a w