The Atlanta area proved to encompass a busy week.

In addition to all the backpacks and hikes around the Atlanta area, we explored the area itself.

I satiated the history buff tendencies in me by walking along among the Etowah Mounds.

The Mississippian People cities rivaled anything in Europe at the time. And their trading network extended into Mesoamerica and to the Chacoan people. Like many Americans, I did not know about this extensive civilization until my adulthood!

The Etowah Mounds, in particular, were only exceeded in size by Cahokia among the Mississippian people.

A mixture of lush terrain that does not preserve structures, the massive growth in the East, and social mores of the times eradicated most evidence of the people.

But what evidence left is impressive.

Artifacts that show a pronounced Mesoamerica influence for example. 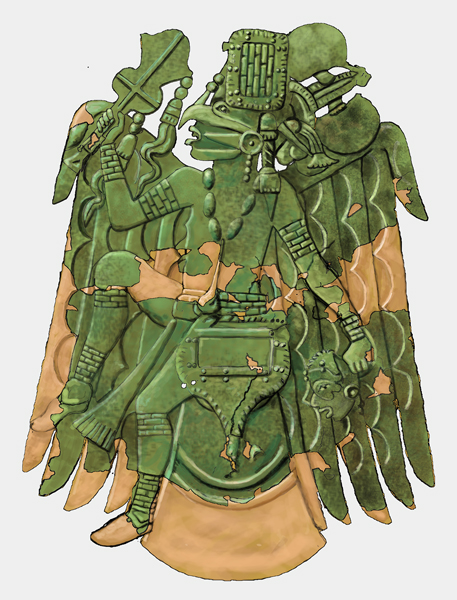 Then there are the mounds themselves. Mounds only exceeded in height within North America by Mesoamerican mounds.

Looking from the highest mound

The flowing Etowah River gave abundant water for the many people located around the site.

Later that afternoon, Joan and I went to the summit of Mt. Oglethorpe.

Once the original terminus of the Appalachian Trail, the summit moved to the Springer Mountain in the 1950s due to much development.  The summit was no longer accessible up until recent years.

Now? A two-mile loop trail is located on the summit, along with observation platforms, a learning center, and a picnic area.

We walked along the footpaths.

A new trail. But may very well be located on the old AT.

The trail leads to the historical view that Earl Shaffer, Grandma Gatewood, and others may have seen.

The original placement of the southern terminus made sense. Oglethorpe is the last summit of the Blue Ridge Mountains, and the view is towards the valley north of Atlanta. A fitting start or end for the Appalachian Trail.

The outdoor enthusiast and historian appreciate being on the old pilgrimage path.

Old marble base for the Oglethorpe monument since moved to Jasper, GA?

An old, and closed, road leads from here. Currently on land owned by a hunting club.

Besides the impressive views and historical interest, the Appalachian flower sightings proved to be another highlight of the summit area.

After this day, Joan and I went on different trips described earlier.

While Joan worked, I went to a nearby national park unit and performed trail work with the trail maintainers of the park.

Making myself useful today and petforning some #trailwork in the #atlanta #georgia area.

Brush clearing mainly and easy enough. And a unique way to explore the history.

I later watched an American Civil War band play some era-appropriate music. I then went to the small, but excellent, museum in the park.

After I had a late lunch at a local Greek bar that served both cold beer and gyros as the house specialty. Mmmm!!!!

Later that night I’d start the first of a few social visits in the area. Two old friends lived in the Atlanta area. And my cousin moved here recently.

Chris and I are only a few months apart in age. Like all the many first cousins in my family, we all grew up less than twenty minutes apart. When I moved to Colorado, it was strange to my mid-twenties self to learn people grew up who did not know their cousins!

Chris is on the right, I’m on the far left. Freddy (Chris’ brother) is in the middle and about two years older than me. Our mothers loved to dress us alike! Funny enough, Chris and I had similar plaid shirts on that evening we met up. Ha!

Joan and I met up with Chris at his nearby place. So good to see Chris apart from a family event such as a wedding or a funeral. We went out to dinner, enjoyed some local craft beer, and a yummy meal.  We spent the night over at Chris’ house and sipped coffee in the morning. Did not matter it has been years since we saw each other. The conversation flowed easily. You can tell we are related by the hospitality alone!  More importantly, you can also tell we had a very close relationship in our formative years. So good to see him and have him meet Joan.   I plan on being in Atlanta more in the coming year, and I hope to keep seeing Chris more.

On a similar theme, we met my friend Matt and his wife Virginia for brunch that Sunday. Matt and I became friends at one of my first tech employers “back in the day” in the Boulder Bubble.  Matt left Boulder, toured the US by bike, and then made a life for himself in Atlanta.  Matt, Virginia, Joan, and I enjoyed the conversation and seemed to have much in common. Another relationship that I hope to re-kindle in the months ahead, too.

In the days after, we hiked or played tourist. In particular, we explored a park closely tied to where I did trail work.

Observation tower at a key American #civilwar battlefield. The CSA never did remove the Union forces from #chatanooga. Open fields interspersed with woods made this battle along the lines of Napoleonic battles rather than the WW1 prequels (trenches, earth works, defensive positions favored) that came later in the war.

And on my second to last night in Atlanta? We met another old friend.

Shawn knew me during my high school years. He and I shared some incidents that gave me the nickname of Mighty Mouth. 😀 You’ll need to ply me with a few beers to get the story behind that nickname. Oddly enough, more than few beers caused me to receive that nickname when I was 17. Ahem… 😉

Shawn made a career of the Air Force as a pilot, retired, and now works as a commercial pilot out of Atlanta.

We lost touch, but Facebook reconnected us. Score one for the usefulness of Social Media!

Shawn knew me well before the outdoor phase of my life commenced. He adroitly noticed it took a “match to spark my interest”  to find the passion that defines me in many ways.

But, as Joan noticed, the years did not matter. The shared history and friendship made it seem we only saw each other recently rather than twenty-four years ago.

Twenty-four years is much too long. Never again!

I met Shawn’s wife Trisha (who warned Joan about how much native RIers talk about their food. Too true!), his buddy from the Air Force and now a fellow pilot who married Shawn’s sister (who I also remembered!), and Shawn’s delightful nieces.  Joan got a kick about hearing my Mustang-with-chrome rim days stories. See above about needing beer to listen to those stories!

And the meal? A classic southern meal at the esteemed Mary Mac’s Tea Room. I waddled out…but it was GOOD.

As with Chris and Matt, I plan on keeping this renewed friendship active.

Atlanta has been a delight. Renewing friendships, finding out culinary places of interest, and seeing some history.  I suspect there may be more Atlanta and related posts in the months ahead, too. 🙂

Glad you got to enjoy some southeast hiking, should have hit a Pinhoti trail section in Alabama on the way through!

Perhaps in the Fall when it is cooler. 🙂

Early November is the perfect time, that’s usually when the leaves are changing and temps have (mostly) gotten comfortable

Awesome! I’ll need to check it out.

Glad you had a nice visit to Atlanta! I love hiking/training at Kennesaw Mountain NBP when I can’t make it up farther north, so thanks for pitching in to help maintain it.

I am hoping to more trail work there in the future. I’ll be visiting Atlanta on and off in the coming year and need to make myself useful once in a while! 🙂

Now I know I wasn’t the only kid with plaid overalls!